Attack of the Sassy Black Woman

There was a line in an episode of Sex and the City where Carrie laments to her friends that she had to get on her "Sassy" horse. Now I assumed she was making a reference to the trailblazing yet defunct magazine edited by Jane Pratt for teen girls. 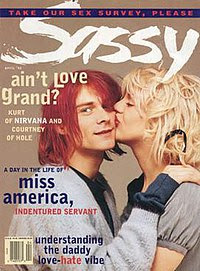 That's the good kind of sass. The following commercials for Popeyes and Vitamin Water may be teetering on the edge of the all-to-familiar stereotype that depicts Black women as shrews, tough or uncouth. While I don't find these commercials as offensive as the BK/Sir Mix A Lot/Nickelodeon debacle since that was specifically marketed to children, I do find aspects rather annoying. We need not fly into a tizzy but we should not ignore these "little" acts of racist depictions either. See for yourself.
Does a fried chicken company using a Black person automatically make it racist/offensive? I like Popeyes. I'm going to lean towards the "potentially oversensitive" reaction. Now if someone else finds it offensive they have every right to feel that way. I take offense to whites telling Black people what they should and should not feel about such matters like the bloggers at Jossip. I also admit I find the name of the commercial more problematic than anything else.
The thing is, I'm tired of being outraged. It's an emotional response that never heals and like a scab can be ripped off time and time again. We don't know whether the characters were written with that edge or if it was a choice of the actors. Ok, I'd err on the side of the powers-that-be pushing them to "Blacken it up", meaning to behave in an obvious and narrow way. I don't know though. I'm not sure if I'm entirely convinced because if these characters had been portrayed by white actors would they be deemed racist? Or Asian? Margaret Cho pulls off sassy very well. Still when certain portrayals are enacted by people of color the intention and the execution can be problematic and should not be ignored. If you think it should be addressed you must contact the companies directly and tell them.

Opinionated Viewpoints By Faith at Acts of Faith Blog at 4:01 AM

Email ThisBlogThis!Share to TwitterShare to FacebookShare to Pinterest
Labels: Acts of Faith Blog, Black Women, Commercials, Racism, Too Much Sass

Slowly but surely the Black woman is definitely being stereotyped again - and not in a good way. If the stereotype was an educated, sophisticated, warmhearted or otherwise depiction, that would be one thing. But from one end of the spectrum to the other, mainstream media can't seem to envision us as anything other than someone who can provide comedy with over the top attitude and gestures.

Personally, I am in a tizzy about it. It's old as hell and I'm sick of it.

Thanks Sheila: I'm still on the fence but like I said you should speak to the companies directly. Call the PR depts and you'll probably get through faster. That outrage must have a place to go otherwise it's just a wasted emotion.

There's a commercial with Charles Barkley, Yow Ming, and Dwayne Wade where Dwayne is jumping from the delicacy of live shrimp that I presume is a delicacy in China...I think the commercial is totally insensitive...must we poke fun at other cultures to sell products...that's so..1986...