Here's the 2nd segment.
I forgot how long these conferences are! I was sending lots of updates to Twitter and gained a few new followers in the process - thanks! So I focused on those delivering the messages but I should also comment about the host and the event itself. So Tavis Smiley's been doing this for 10 years: hawking a new book and about to embark on a tour, talking about a "Black agenda" with no tangible coalition and no evaluation for participation. If you don't vet those you seek to join your "covenant" how can you guarantee some modicum for success? I don't think Smiley is a complete idiot (but perhaps he is) so I can only deduce he is using an event where he stirs the emotions of people to persuade them to buy the products he's selling and to lend him an air of legitimacy based on his proximity to a certain group of Blacks part of the pseudo-intelligentsia crowd. Those who are serious about promoting an agenda to raise consciousness amongst the sheep mentality are usually not invited to participate - or if they offer a dissenting voice aren't invited back. The main interest is in getting people to vent and feeling good about it but not taking any long-term steps for empowerment. 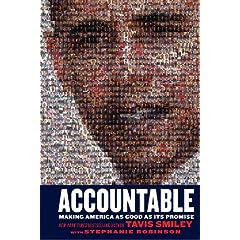 He deserves legit criticism of his motives for doing these events, feeding from the trough of corporate sponsors who do harm to Blacks and the requirement that all attendees fill out an extensive series of forms for market research purposes that nets him a lot of money. So one might question how a person has a panel of prominent Blacks talking about Black empowerment when he's doing what he can to control it and undermine it at the expense of other Blacks. Yeah it's pretty twisted. He also got a lot of flack for his overreaching criticism of Obama that he has never extended to Bush or either Clinton.
He also insulted a host of bloggers who are interested in empowering Blacks by trying to design a blogging contest where the blogger had to jump through a lot of hoops only to be picked out of a hat by the sponsor in the end. So why do we watch? Train wrecks are always interesting! Sometimes a panelist will offer jewels of wisdom (not just pearls, but diamonds/rubies/the whole nine). Like Randall Robinson (1:25 thru 1:42 in particular) who very clearly laid out the Clinton policies enacted during his terms that not only caused harm to Blacks but how the US enacts policies that are anti-children, anti-women, anti-environment and oppose human rights. Also Erica Williams (around 1:50) from the think tank Center for American Progress is one to watch and a policy advocate. Van Jones follows who spoke about preparing for a green (environmental and monetary) economy. Karen Bass discusses how the state of California spends more on prisons than education! I wish she'd run for Governor!! It was good stuff!
LosAngelista did an entire series of posts live from the LA Convention Center. CPL at Jack & Jill wrote 2 great posts that were open threads...of criticism! HA! Feel free to check them out.
Los Angeles Mayor Villaraigosa made a point that Blacks should really take notice of. He said we were here due to Civil Rights and due to the Voting Rights Act. Thanks to those that sacrificed foreign immigration opened up for other non-whites as a result. He may have been trying to lump all of us together as a collective mutli-ethnic "we", but to me the "we" isn't us! Blacks had better start thinking about this more instead of blindly adopting the 3 Musketeers mantra without checking for flying objects first.  Tom Bradley as Mayor of LA being a "first" at one time is a part of our history but if people rely on past endeavors, fall by the wayside and are supplanted by those who come here by choice then it's really our fault. Nobody's going to wait for Blacks to catch up and get it together.
By Blacks I'm talking about those of us descended from the slaves who built this country. Not every Black person who's in this country falls into that category or has an agenda that would be of benefit to the masses. Rev. Al was on the panel claiming Civil Rights was about seeking equality. Since when? You can't have equality by excluding the contributions of the Black women that sacrificed themselves for the "cause". If equality was the goal then it was an utter failure because we are back to being segregated with a lot of lip service. 40 years later there's a Black President but he got elected by pretending to be indifferent to Blacks so that whites felt more comfortable! Since when does being the girlfriend hidden in the basement equal a love match? Did you know the UK census has three categories for Blacks: African, Carribean and Other?
My other criticism is the fake religiosity, the deliberate exclusion of LGBT voices (and not just adding one gay male to a panel and calling it a day either), the inclusion and recognition of Blacks from different class structures and ignoring the fact that many people are poor and had no representation. The bloggers he kept touting were basically corporate hacks and those who don't really do any community outreach or have a significant following that I'm aware of. It was a wasted opportunity.
There was also NO discussion by medical professionals (that one quasi educator doesn't count) about the rampant spread of HIV and STIs amongst Black women with a serious discussion as to WHY IT'S HAPPENING or an agenda of how it's going to be fought. There is NEVER any discussion about the rate of out of wedlock births and why so many Black women and children have been abandoned nor of the high abortion rates that exist disproportionately with Black women. There has never been any discussion about the prevalence of sexual intimidation, molestation and rape by Black men and the violence in residential areas either.
I had to add a personal shout-out to Maxine Waters for taking Wells Fargo to task and who cares they were a sponsor? Is Tavis going to disinvite her now? They got our tax money AND a tax break for underwriting the event so boo-hoo poor corporate entity. Did that make Smiley's cut a little bit smaller? How much do you get for kicking people when they're down?
These issues are of course a microcosm for every other problem in the society as we try to navigate through the personal and political. I thought it was important to cover though because Blacks have an opportunity to step out of the box and create our own separate but just as valid spaces and bring as many along as we can. We don't need self-appointed leadership who wants to keep things 'business as usual' where they prosper at our expense. We have a global audience now.
Whites who are either "guilty" or "angry" are watching what we're doing collectively - in silence but with scrutiny.

Opinionated Viewpoints By Faith at Acts of Faith Blog at 7:55 AM