Total: 4,697,635
9.3 times the maximum TOTAL number of Black votes in California.
Continuing this discussion of the failure of the No on 8 campaign and similar legislation in FL and AR, I'd like to work on presenting strategies we should consider.
1.) End this focus on Black straight religious-based labeling of those that voted Yes on 8 as homophobic. There is a larger argument here that is multi-layered and not as simple as 'black and white' or 'loving God means hating gays'. Accept the fact that some people's religious traditions do not support LGBTQI on certain aspects but find other issues that you can get their support on. There is too much emphasis on sex and sex acts and not enough consideration of loving monogamous (if you will) relationships and families. Focus on poverty, housing, employment and improving the lives of children and you will make inroads. I have a religious tradition that has constantly evolved as I've matured, experienced things in life and have revisited what I believe. It's called evaluating, questioning and growing - something that we can all benefit from.
Read this article in the Bay Reporter Online from October 23, 2008 that focused on Black religious leaders and community gathering for support for No on 8.

About 100 people gathered at a predominantly black church in San Francisco Sunday, October 19 for an evening of preaching against Prop 8.

Referring to blacks' fight against oppression, the Reverend Amos Brown, of Third Baptist Church, told those present, "We have become that which we hated."

People "ain't got no business telling gay and lesbian and transgender people that they cannot have equal protection under the law in these United States of America," he said. His words were greeted with a loud standing ovation.

So much for that "all Blacks hate teh gay (and can't be gay)" meme!!
2.) The Gay Rights Industrial Complex (GRIC) has a serious image problem. First of all every LGBTQI person is not white, male (mostly) and monied. That's the only aspect we see. Look at who's running the organizations, who's driving the media narrative and who the celebrity spokespeople tend to be and it's a virtual white-out. If you present yourself as exclusive and wealthy any cries of discrimination and marginalization are not gonna fly!! You can't have it both ways. A regime change is absolutely necessary from the top down.
3.) Where are the people of color who are LGBTQI? Where is the parity within the GRIC? There should be conservations between them first. Why have you allowed a movement with an agenda being pushed that largely discounts you? There has to be a coordination with non-LGBTQI supporters who should be at the table as well. And let's be real: people need to go places they don't feel comfortable going and speak to people as human beings, not as labels. The one thing that should be gleaned from the Obama campaign is community organizing and listening to those whose viewpoints you are unfamiliar with or don't agree with.
We need more of this: 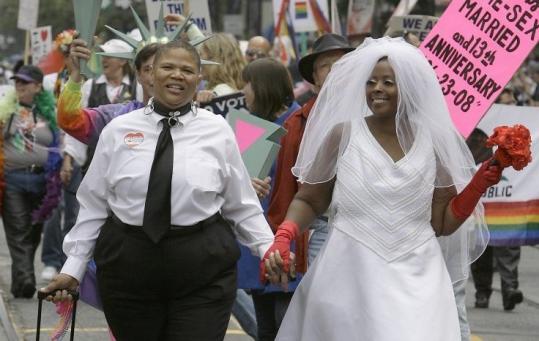 And Less of this:

4.) If whites had a real understanding of the tradition of Civil Rights and how it began in the Black church they would not continually lay claim to the idea in theory when applying it to Gay Rights activism. Have you ever heard of a repeating comparison to the Holocaust? Of course not. It's ridiculous! Yet there is this inherent racism, yes, racism by placing all Black people into victim status and then trying to co-opt our struggles as having the same meaning. It also places a hierarchy of status by placing Blacks beneath whites - which brings us full circle back to my beginning argument. There are also the struggles of the other ethnic groups (Natives, Asians, Latinos, etc) that haven't even been considered. No matter what circumstances or who is involved it always seems to come back to blaming teh Black.
In the end the Marriage Amendments may have to be decided by a ruling from the Supreme Court. Hopefully the Obama administration will be able to make at least 2 appointments of more moderate (but I'm hoping for uber liberal) judges. That's why voting for him and working on a long term agenda is so important. You might be surprised to find th actual votes from white gay males was lower for President-Elect Obama than Sen. John Kerry. Let's not even talk about the Log Cabin Republicans!
Black people and other PoC who are LGBTQI and supportive of have to sit down together and hash things out with those who are not. White people who are LGBTQI and supportive have to make a choice about what's most important to them: white privilege or gay rights. And act accordingly.
A coordinated attack from an opposition force that is well organized and well funded will not survive if all allies are united.
Opinionated Viewpoints By Faith at Acts of Faith Blog at 5:17 PM

Why are you so sane and the dailykos people so insane?!

You continue to be on-point IMO.

Self interest rules? Perhaps because we're Black we still need our separate spaces. Shoot we could've come up with a better plan to help Prop 8 go down than the ones running it.

Jasmyne Carrick, a black lesbian, has been out there organizing on this. Lately, she has been pointing out the problems in the gay community and how they relate to people of color. She has made some good points on her blog, op-ed's, and interviews.

I agree with all of your points.

My question is, how come we don't see the same outrage when a black gay or lesbian is killed by both communities?

Brother Omi asked: My question is, how come we don't see the same outrage when a black gay or lesbian is killed by both communities?

I don't know. There was a national outcry over Matthew Shepard. I wrote an earlier piece where I pointed that out. When 25K people can show up for a Marriage Amendment but we heard crickets over a Black/Brown person being murdered or railroaded by the system (Michael Shandy, Sakia Gunn, the NJ 7) I think it speaks volumes about who sets and agenda and who decides what the "priorities" are.