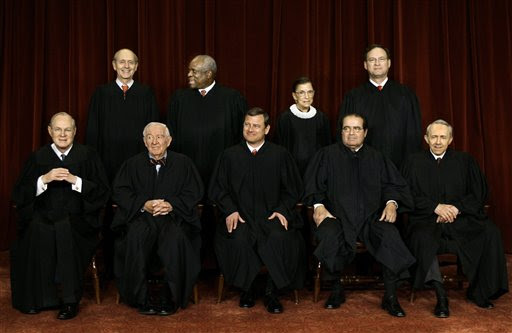 The Constitution was always a flawed document inasmuch as the architects were guilty of major double-standards in drafting it. It works in theory however - and it's supposedly the jewel in the crown of the making of a nation. Now we know this country was built on murder and mayhem but we were supposed to aspire to attain greatness despite that. Like I said - in theory. So now the Supreme Court delivers yet another blow to the idea of ascendancy by revealing the reality of its application. How low can we go? Apparently there is an even deeper bottom. Now perhaps some lawyers would like to weigh in on this, but doesn't this mean false evidence used to prosecute people has been legitimized? Now I know the Law & Order series is a nice scrubbing of the actual corruption of law enforcement (which is only as good as its participants). Dick Wolf really goes out of his way to show a fair and balanced Police Department and District Attorneys Office.  So now what? More death row inmates being tried and found guilty for crimes they haven't committed? Doctored DNA? Where does this end? If police don't get search warrants or have just cause for their actions (thereby shooting more innocents) how far will this spiral downward?
Photo: AP

Opinionated Viewpoints By Faith at Acts of Faith Blog at 1:36 PM

its amazing to me how people think that constitution is absolute, right and exact on every letter.

IT is supposed to be changed. It has to evolve. Or it has to be burned.

Twice in my life I took an oath for it's defense. As I got older, I realized the fallacy of it.

Germans now take an oath to their conscience and soul. maybe we should take note.

Personally, the idea of keeping Supreme Court Justices as appointees for life is VERY outdated. it only ensures that odl white men will run things in the judicial side

Well I'd like to see a change with the Supreme Court where they serve a 20 year term or less. I shudder to think of Roberts being on another three decades. I also don't revere the Constitution. It's a sham that we (or they) hold it in such regard in the first place. Though I also realize EVERYTHING in life is only as good as those that participate; and they have a lot of flaws. Like w/ church.