Sorry Folks: My internet access has been very spotty and I haven't been able to update anything!
I’m sure for many it was a day of tears. Tears of joy, frustration, sadness or intimidation but definitely memorable. I for one was very happy not just for a Black man getting elected, but definitely getting a qualified person for the office of President. I’m especially proud of having our first Black First Lady and who doesn’t think their daughters are absolutely precious!

DC traffic was tightly micromanaged and the public transportation slowed to a trickle as the transit authority tried to manage the crowds. One woman fell onto the tracks at a station and would’ve gotten run over if not for the quick thinking of an officer who pushed her into the space under the platform.

Many people camped outside overnight away from the perimeter zone by the National Mall in order to be the first ones on the scene. They didn’t care whether they had tickets or access – they just had to be there. The official count totaled 1.8M people but I can guarantee there were probably a minimum 500K additional people vying to get in. Factoring in the wind chill it felt as if it was 12 degrees or less, but that didn't deter people from participating. Crowds flowed and swelled to the point where you couldn’t move your arms as people tried to push their way to the checkpoints.
Those who received Swearing-In tickets felt like the million dollar jackpot winners. Tickets were color-coordinated with a designated Metro stop and gate entrance. When I went to Nancy Pelosi’s office to claim mine the bulk of the remaining people milling around were stragglers begging for unclaimed tickets. Yes, some people actually did not show up! The ticket has a map on the back but there was some confusion amongst Silver ticket holders who went to the Purple Gate, which had a better viewing area. 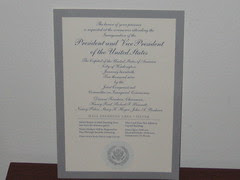 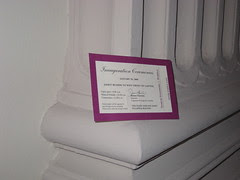 I heard from other attendees (and apparently some of Pelosi's staff) despite being in line at the time of the Gate opening (and having waited for 3-4 hours prior) they were turned away because so many others had tried to bum rush the wrong access points. Let me tell you, I would've been furious to have flown here and not get in because the Joint Congressional Committee on Inaugural Ceremonies did not plan well. That's on Dianne Feinstein, who I thought was hamming it up to the nth degree and needed to remember it wasn't her election, it was the Obama's. Plus, I was informed by someone I met in passing he got a seated ticket from her office after requesting on November 5th and he's not from California! If things are truly going to change in government we have to do something about patronage.
I saw the craziness from afar {magnify that crowd by 10K} and decided to leave for the comfort of an office party. I have a really bad cough right now so that decision was as much a health preservation as much as anything else. I was 2 blocks from the White House, warm and fed! I'm glad I left because I very well may not have gotten in and I promised I wouldn't write another angry post like the one about Denver, but it's the same problems for the same reasons. Don't these committees PLAN for anything? Did they really expect people to honor the fact they didn't have tickets and would stay away from the ceremony?! Ha! There has never been this level of interest in an election. 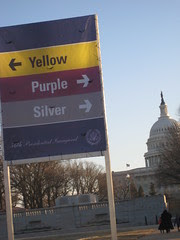 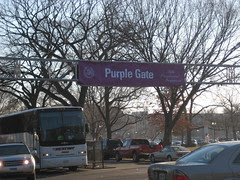 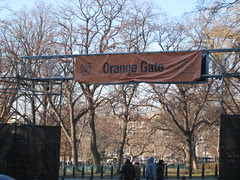 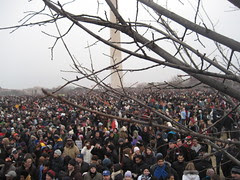 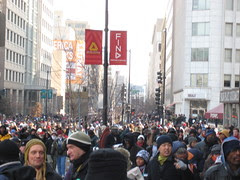 While at the party I was on Twitter and reading the real time messages out loud had many of us cracking up. Bill Clinton looked mad and I saw Hillary nudging him to perk up and be happy for the cameras. Jimmy Carter was beaming. Dick Cheney gets zero sympathy for his wheelchair antics and scowl. Shrub looked like he wanted to bolt. I also noticed how he and Laura were oh-so-firmly being guided to the plane to get the h-e-l-l out!!
We had a collective sigh of relief that Aretha Franklin stayed fully covered but I was surprised she wasn’t wearing one of her many furs. Rick Warren was a big bore – but he had to be chill. Jeff Lowery was hilarious - and no offense - very elderly! I loved that he tacked on a portion of the Negro National Anthem to his Benediction. Elizabeth Alexander's poem was like a great piece of art: beautiful but over the heads of a lot of people. Reading the text later made it much more palatable.
Who didn’t notice how Chief Justice Roberts messed up the Oath? You know our new President AND First lady both had it memorized. Some pundits tried to claim he was nervous – yeah right! It was hugely disrespectful. I can’t wait for him to be neutered when Obama starts appointing new members to the Supreme Court. I also think it’s time to revisit this lifetime appointment nonsense. **So now Roberts contacted the President to redo the Oath after receiving much derision. Idiot!
Our new President’s speech is also being panned in some circles. Fox News is just mad that they’ve been ignored at every conference and put in the dunce corner! That’s what they get for calling our First Lady a Baby Mama. I am happy to report that after collapsing during the Inaugural luncheon Ted Kennedy has been released from the hospital. Poor Robert Byrd also needed assistance but nobody’s talking about him. How likely was it for a former Klan member to support a Black man for the office of President?
President Obama (I won’t ever tire of writing that) proved that he could run for office without the expressed approval of the old guard Civil Rights appropriators or the so-called but doing little Black elite. Speaking of, I noticed 4-5 members of the Congressional Black Caucus on the dais with the Obamas and everyone else. So we know that Donna Edwards is cool and truly progressive, but does this indicate a shift in their relevance?
Thanks to white supremacy we tend to focus on race disproportionately. There are definite class differences amongst Blacks that are not acknowledged. Part of the issue with lack of advancement opportunities has a little something to do with that. The portion of his speech where he spoke about overcoming barriers and freedom to pursue our bliss was very poignant for me.

Michelle wore a lemongrass Isabel Toledo sheath dress with overcoat, Jimmy Choos and leather gloves in a great shade of green during the Swearing-In and a Jason Wu gown for the Balls. I see that begging on television incessantly paid off for Beyonce who got to serenade the First Couple for their First Dance at the Neighborhood Ball. Where was Jennifer Hudson? She decided to perform at the Super Bowl so why not the Inauguration? Oh well. Psst. I'm gonna put it out there with fingers crossed behind my back: I'm wondering if Michelle has not been working out as much as she usually does.....or if she might possibly be pregnant {dodging thrown shoes}.
I did manage to watch the Colbert Report Tuesday and he touched on some of the things a few of us were grumbling about: like why the focus was on asking Black people if they ever thought they’d see the day we’d have a Black President. He also did some other things that were funny...but gross! This ignores bigger issues - for as powerful as that symbolism is and how happy this election makes some of us feel - it still doesn’t address core issues of personal responsibility and correctly wielding political clout. I want the Obama Presidency to be considered one of the great times in our history. There can be no denying how he and the family really move people and have touched us in a profound way. He may the exception but I also want Black people reevaluate our priorities and not rely on that. I especially want Black women to know better and do better. Our futures will depend on it. This is a wonderful time for reflection, renewal and making small but lasting changes.

I have much more to say but I needed to attend a breakfast being thrown by Speaker Pelosi for California constituents. I’ll report more on that later.

Obama photos: AP/Check out my Flickr stream for the rest.

Opinionated Viewpoints By Faith at Acts of Faith Blog at 3:32 PM

I really loved your account. You're not the first person to say that the organization of this was really off, and you can totally place the blame at Feinstein's feet.

I will say this about Jennifer Hudson. I think she stayed away out of respect. I don't think she wanted Obama's big day linked with her tragedy, and what would have happened if she had accepted?

EVERYTIME they mentioned Hudson with the Inauguration, they would have mentioned her tragedy. I just believe she respected The President ' like that'.

Yes, she's singing at the Superbowl, but that is, afterall, just a football game. What's there to 'taint'? Nothing.

Thanks for visiting and welcome! I hadn't thought about the Hudson situation that way, but I figure if the Obama's didn't have a problem with her performing no one else should. I saw an interview with the man that threw the People's Ball mention that the celebritites expected to be paid 6 figures in order to perform. There will never be anything like this ever again.