Laura & Euna Are Free! Is This A Rise From the Ashes Moment For the Clintons? 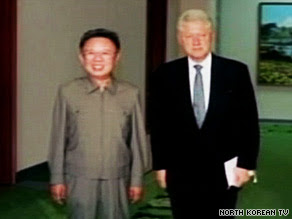 Kim Jong II has pardoned journalists Laura Ling and Euna Lee. Former President Clinton flew to North Korea to negotiate visit with the North Korean leader. I am certain their families are very relieved - and grateful. What I am even more curious about is what was promised to secure their release and why it was Billy Jeff who went and not another dignitary, politician or high-profile emissary like President Carter...or even Jesse Jackson, Sr.

"Clinton expressed words of sincere apology to Kim Jong Il for the hostile acts committed by the two American journalists against the DPRK after illegally intruding into it," the news agency reported. "Clinton courteously conveyed to Kim Jong Il an earnest request of the U.S. government to leniently pardon them and send them back home from a humanitarian point of view.  - - CNN

I think the women have learned a valuable lesson about not playing with knives so to speak and how willing they were to risk their lives over chasing a story. Everyone always thinks they'll be the exception and someone else will be the "unlucky" one who never has to pay a penalty. There's still speculation that they may have knowingly entered North Korea illegally. Of course that hasn't been proven. They're lucky to be alive quite frankly.
Does this help elevate the status of the Clintons and separate them from President Obama? Does this diminish Obama's stature? Did he need to seem distant from this situation to facilitate a quick remedy? I suspect whatever is going on behind the scenes, the political fall-out has yet to hit the fan. A "victory" might have long lasting repercussions that have yet to be revealed.

Opinionated Viewpoints By Faith at Acts of Faith Blog at 12:59 PM

Another blog (IIRC it was AmericaBLOG) raised the rhetorical question of whether or not former Pres. Bush could be sent anywhere to accomplish anything with anybody. We all know that the answer is a resounding NO.

Even though I always disliked and distrusted "Slick Willie," he does have his uses. Good for those 2 journalists!

Khadija: I'm going to go peruse America BLOG which I haven't done in a while. Oh no - Shrub would not have been able to meet with North Korea. Not when he referred to them as part of the Axis of Evil!

I've also noticed a lot of praise being given to Billy Jeff right now as if some have already forgotten the primary Clash of the Titans.

I'm wondering seriously if Hillary's going to make a run for 2012 now.

It's my understanding (and I could have it wrong, barely coming up for air these days with deadlines), that the women worked for a newspaper owned by Al Gore, and Clinton did it as a favor for Gore. Of course, I didn't think those two were on the best of terms either. Maybe it's a mea culpa?

Roslyn: They're journalists for Current TV which was started by Al Gore and others. It's based in San Francisco. I'm assuming Clinton wouldn't go without Obama's approval though so I'm still curious about the deal that was made. Lee & Ling were released immediately and allowed to fly back with him. They are LUCKY!!!

This is a side point, but I noticed from the photos of their homecoming that both of these women have non-Asian husbands. One husband looks White; the other one also looks White (with a possible Latino name).

Yet another example of how Asian women do whatever works for them!

Khadija: (chuckling) Oh it was actually the first thing I noticed after Lee & Ling had been taken and the families were on Larry King. Ling's husband is absolutely gorgeous!! I thought it was a bit shallow of me to think about that at the time. Lee's husband is Mexican if I remember correctly. Here's the Larry King interview from June http://actsoffaithinloveandlife.blogspot.com/2009/06/i-had-no-idea-it-was-lisa-lings-sister.html