Why Should Caroline Kennedy Be the Only Woman Considered For NYS Senate: Pt. 1 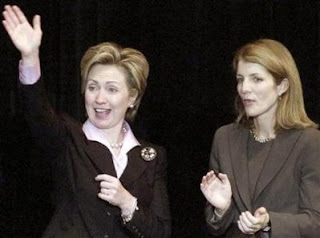 I had to marinate on this one for awhile. When the first news stories appeared linking the progeny of a former President to the potentially vacated seat of the wife of a former President I was waiting for the predictable media spin. We've been told that she was not exactly qualified, that she was part of a dynasty, that she was riding the wave of family name recognition, blah blah blah.
Then we heard some other blatherings from the allies of the wife about how the progeny wasn't somehow good enough and I asked myself, why not? I mean, she grew up in a powerful political family, she has a law degree and she's white. Yeah I said it! Some of those same people doing the oh so predictable I'm a Victim When it Benefits Me dance, who decried sexism as the Worst.Thing.Ever!!!! should have been dancing on the ceiling, right? Right?
Oh, wait, it was the male Kennedy cousin that supported the Inevitable One during the primaries and he was allegedly 'promised' the Senate seat as a reward. Ummm, don't the voters of New York State have any say in this? I mean I know we're trying to get through the last days of one President with a skewered God-complex and a Vice President who ran a shadow gov't the entire time. They pretty much obliterated whatever fallacy we've held about the hallowed Constitution that denied many people their basic humanity, but I don't want to digress. I know that Governor Paterson is allowed to appoint someone to fill the seat mid-term. That little Blago seat-(selling) controversy wouldn't mean much if there wasn't supposed to be an air of propriety - even if it's not followed.
So I'm sensing, I don't know, a little cattiness on the part of the Keep Us On Our Pedestals Crowd. To be honest I didn't immediately do a happy dance at the news because I'd like to know what qualifications Kennedy has. I just don't think the crux of the argument from those other rabble-rousers have anything to do with seeking a quality candidate but it's about them wanting to call the shots. Kennedy has been an outstanding Obama ally when she didn't have to do anything more than vote for him. The first things that come to mind when I think of Caroline is that she's married, has children, does a lot of charity and keeps a low profile.
Now that doesn't sound like the average blowhard politician does it? Quiet, hard-working and scandal free? So this fake outrage and lazy (under)reporting by corporate media, yet again has me shaking my head. This is just more drama coming from the Macbeths of the political world and their media lackeys. I wonder if the Clintons are ready to take the Kennedys head on, though. We all know what a scrapper the Mrs. is, but pride goes before a fall. She hasn't been confirmed yet! This could be a real Clash of the Titans.
There are in fact other qualified women who should be given full consideration as well. Black women who've paid their dues and actually served time in office. I am also certain there are other Women of Color available. So why aren't their names being bandied about by the press? See Part Two of this discussion to follow.
photo credit Reuters

Opinionated Viewpoints By Faith at Acts of Faith Blog at 12:06 AM

I am still scratching my head on this one. She supported Obama, so in normal cases, shouldn't she get a cabinet position? why appointed to an elected official's seat?

I am not saying she is or isn't qualified, I just don't get it. But I am sure there are women and men who much more qualified.

Well she's an ally. Obama needs to keep as many of those as he can since he's surrounded himself by people will are likely to stab him in the back given any opening. If Clinton is out of the Senate and Kennedy gets in she can be set up to run for President. If (when?) the Clintons mess up Obama can get rid of rid of Hillary as SoS and she'll be effectively blocked on the national level as well.