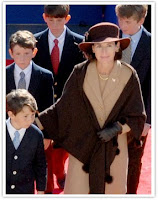 In what has to be another once-in-a-lifetime event, the First Lady of SC isn't crying for Argentina! She's not "standing by her man" or "suffering in silence". In the Curious Case of Yet Another Cheating Republican this story has a major plot twist that goes against the grain. Hallelujah!
Just to bring you up to speed, the Governor of South Carolina, Mark Sanford went missing for nearly a week. It turns out he was in Argentina with another woman. A woman he's had a long-standing extra-marital relationship with. He was gone during the weekend that included Father's Day despite his having four children. What kind of man abandons his kids to go chasing after another woman that he's not married to? A selfish jerk that's who!
There's about a zillion emails that would rival the text messages sent between former hip-hop Mayor Kwame Kilpatrick and his piece on the side. Now it's yet another same old-same old of monkey see - but do not do what I do -  as he was one of the Republicans who'd called for President Clinton's impeachment, cited family values and recently refused Federal stimulus money. You know  - a real tool! He isn't offering to resign either. Arrogant to the end this one.
The corporate media had irrefutable proof of the man's cheating and lying but sat on it for MONTHS. This shows you how deeply imbedded they are in obstructing the will of the people in favor of sharing profits and giggles with crooked politicians. I know "crooked" and "politician" is an oxymoron. Just ask Monica Conyers.
Anyhoo, Mrs. Sanford did find out about the relationship because these types of things do not stay a secret forever. She gave him time to get his priorities together. I guess he's showed who and what's most important. Not the job he was elected for and definitely not his family. What was different this time is she didn't attend her husband's fake mea culpa press conference with her head bowed, she's not trashing the other woman and she hasn't retreated to the background in shame! Luv it. Is it really 2009 or something's in the water?

Jenny Sanford said Thursday that her husband Mark Sanford's political career is "not a concern of mine" and that she'd be just fine -- regardless of whether their marriage survives. “He’s gonna have to worry about that, and I’m going to worry about my family and the character of my children,” she said. (CNN)

I think Ms. Jenny is not only NOT singing "Stand By Your Man" but will be in fact singing "D.I.V.O.R.C.E." very soon! Good for her. You know sometimes women put up with a lot of things because the overall benefits seem to outweigh the sacrifices. Then there's crossing a line that should never be broken. When a woman is fed up that's it. She seems to have enacted boundaries and standards for herself and her children for what she will and won't tolerate. After she basically funded and has been an integral part of her husband's political career he has a funny way of showing his gratitude. This is a valuable lesson for all of us to learn. The sooner the better. Don't sacrifice yourself for another person. When you do too much for them they do not appreciate it, they come to expect it. Then you've lost your identity.

Opinionated Viewpoints By Faith at Acts of Faith Blog at 2:05 PM

That makes me so happy! (Not that he cheated, but that his wife has some sense!)

Yeah I know!! It's just so rare to see and in public no less.

Sassy J: Welcome. Somehow I think of jazz hands when I see your moniker. Thanks for stopping by.