Will we be eulogizing the death of the "Negro" as we once knew ourselves?
Every day a little bit of our heritage is being tossed on the garbage heap and mocked at as some of us walk - no run -  away from our "Blackness". We think we're freeing ourselves from a life of being thought of as less-than but we're just exchanging one set of shackles for another. If the Ghetto Fabulous/Bling Bling lifestyle doesn't make us permanent paupers, the sexing of any Black man (baby daddy, abuser, married, ex-con, unemployed) with a working appendage is going to kill Black women faster than anything else. The Slave Catchers won't have anyone to rail against because there won't be anyone left who's claiming to be Black.  The Pseudo-Intellegentsia bunch won't have anyone to point fingers at and look down on. White people can't understand them anyway with all that double-speak of long-windedness. Martyrdom offers no death benefits, only death. With no Black women comes the end of our society as we know it.
I'm tired of being assaulted by images of crack pipes, dirty diapers, crying babies and hood life. That was not my existence. Or worse having to endure the complete over-compensation with bragging about fast cars, fancy champagne and all the women some really unattractive guy has slept with. I'm also tired of being simultaneously ignored and vilified, told I'm not attractive because my hair doesn't blow in the wind, etc. If you were looking for a husband would any women of substance is her right mind attach herself to an uneducated, consumerist, perpetually un(der)employed, spiritually bankrupt male? Well not if she wants to elevate herself and any future children she may have.
I made the mistake of turning to an Urban radio station last week. There was some song on where the guy was singing about laying a woman on a table to have sex with her and videotape it. Ugh! I only wish it had been phrased that mildly. I guess I shouldn't be surprised by the depravity that passes for typical Black music today but I was disgusted. I told my sister that I just don't listen to these stations anymore for a reason and she replied the music had always been raunchy but it was more cleverly disguised back then. So I had to think about that. 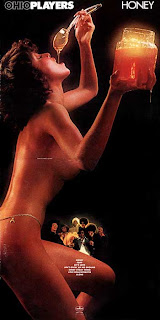 I'm talking the 70's & 80's. Now I remember album covers of groups like the Ohio Players who objectified women for sure with them pouring jars of honey on themselves and whatnot but they were (usually) visibly Black women, right? {I had to go searching for it - here}. I do feel as if I'm somehow trying to justify it, but you'll find an equally cheesy photo of the band grinning for the camera! I realize virtue and perfection are not mutually exclusive anywhere, but why does the wind seem to blow in our direction constantly? As a church-going child I used to look at those album covers and declare they were "nasty men" for doing that. I never once wanted to be that woman and I was never confused that it was inappropriate. Somehow it just seems mild in comparison to today, but I suppose it could be thought of as the gateway to our total cultural destruction. It was the 90's with the rise of "gangsta" rap where things came to a head and fell apart.
It's times like these where I don't feel "Black" because a bunch of self-hating culture killers have sprung up like weeds in the garden of Blackhood to choke the life out our glorious bloom. You know how some of us refer to "those people" and declare "that's not about me". We've watched it happen but did NOT pull those weeds out. We simply mowed over them. You know how when you shave your legs the hair seems to grow back stronger and faster? That's what has happened to African-American (Black) culture. Weeds are meant to be discarded not to be passed off as an entire culture. For it to be falsely assigned as the sole definition of African-American culture is a CRIME. It is NOT what you typically see and hear in the music, film and television being force-fed today - but it has been allowed to be and THAT needs to STOP! Look at this latest form of "entertainment", the movie Next Day Air.

When two bumbling criminals accidentally receive a package of grade-A cocaine, they think they've hit the jackpot. But when they try to cash in on their luck, it triggers a series of events that forever changes the lives of ten people.

Opinionated Viewpoints By Faith at Acts of Faith Blog at 4:00 AM

I was reading the other day and came across several articles that implied that the election of Barack Obama as President of the United States signaled a new era in America: the "post-racial society." Post racial meaning a place where all is equitable and race really doesn't matter. Have you heard? Many say there is no longer a need for Afro-centric media or even a need to celebrate African American holidays or culture.

Yet, many of my experiences, the happenings of the day, and the things you site in your post point to the contrary. For instance, did you know that there is a nation-wide shortage of ammunition in this country? Know who's buying? White Americans--because they are afraid. And, look at the things being said on conservative talk radio. So, while I applaud President Obama and his efforts to unit this country, the frank truth is we are still very divided.

While I believe our nation has made progress, we still have a long way to go. And, I don't believe making progress requires us to forget ourselves or who we worship.

As an avid reader, I believe people must constantly arm themselves with the truth of history. What's the old saying; those who don't learn from history are doomed to repeat it?

Iam Robert: Welcome and thanks for joining in the conversation. I think Obama would like for us to be in a place not everyone will be able to participate in. I get why some Blacks questioned him, though I found the "not Black enough" position a bit disingenuous. It was missing a scope and precision and should apply to all Blacks. That post-racial lie is to lull some clueless people into a false sense of security.