Kal Penn's Got A White House Gig. I Want One Too!!

Actor, er now former actor Kal Penn has started his newest and most prestigous gig to date: Obama White House employee.
What political or government experience does he have you may ask? Well....he....he....meets the needs of this administration in reaching out to South Asians. Kinda like how the Sotomayor nomination caters to Latinos. Let's see....I'm going down the list of people/groups/causes and placing a check next to each.
I keep coming to black people and particularly and singularly to the black women who are not politically connected or wealthy and I keep coming up empty. Hmm I'm sure our name is on the guest list somewhere. Just give me a second.....mmm okay....
See this is what happens when Blogger decides to just unsave your satirical post and you can't recall it. It comes out re-written as a bit more sharp. Like cheddar. Like now....
Anyhoo, I was thinking that should I be selected what on earth would I do for (or to) the Obama administration.
I could serve as:
*Liaison between the wing-nuts and sacred calf worshippers. I mean somebody has to use some common sense.
*I could monitor the Twitter account since I'm online most of the day anyway.
*Be the non-Ivy League, non white male point of view. Because it's not as if PBO is lacking in that representation.
*Instead of having VP Joe Biden discuss how surprised they are by the virulent strain of (disease) unemployment I could have TOLD them outright they were grossly underestimating what was going on. Stats, charts and trends are all the purview of bean-counters. They have jobs. Jobs removed from day to day reality. They know nothing about being unemployed and broke or underemployed and broke. They usually have some previous generational wealth to fall back on. They're white men. What do they know about oppression? 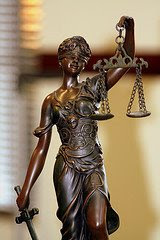 *Since Lady Liberty and Justice are both women and specifically modeled after black women (which you'd know if you did some research) then I am a perfect fit. I am African-American and I have a personal vested interest in justice across the board. Now I take issue with the blindfold. You know it was a man that sculpted that nonsense because if you understand anything about human nature you'd know that women are not silent nor do we close our eyes to things unless there's dysfunction present. And Justice wields a sword. Enoug said!!
*Deploy some common sense and be perfectly blunt about the "real" deal. Get that FCC Fairness Doctrine finally in gear. Cause a major upset and have cable channels unbundled. If it's all ala carte and you have a choice of x.y.z or 1.2.3 then some of these networks will go bye-bye. I say good riddance BET and others of their destructive ilk.
*Remind the President that unless he gets an initiative off the ground by the Fall that the Dumb-o-crats might kill it (i.e healthcare). See it's not only the Republicans who are actively undermining him.
*I've suggested the most deadly enemy of PBO are the Democrats in his own party. We see those Republican hacks from a mile away. Remember Judas sat at the feet of Jesus. That did not stop him from the ultimate of betrayal even though Jesus warned him, Peter, etc. ahead of time. Isn't that a trip? They could've changed course. If we say we want reform we need to be prepared to be betrayed by those that stand side by side with us claiming to want it as well.
*I've also modified my position that PBO is the "Great Appeaser" trying to get things done and may be closer to the "Great Compromiser" to remain in office. So, I'd have something to say about that. What we don't want is an OZ behind the curtain. My POV is far more liberal than his. I'm not sure how that would work out in real life, but this is my "fantasy" post so bring it on!
* I'd get to do something with the First Lady's office and give a first-hand account how regular she is. My social calendar would vastly improve and I'd use the access to find a most suitable and amenable partner I'd ever expect to meet. I wouldn't be Condi referring to to Shrub as my "husband". I'd have my own life!
Photo

Opinionated Viewpoints By Faith at Acts of Faith Blog at 7:17 PM