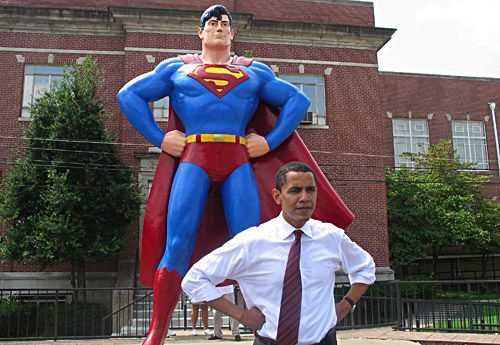 Ok I just saw this and thought, what is this world coming to and this is a sad case of hero-worship run amuck but then I realized it's Perry County in Alabama and they still celebrate the Confederacy!

The rural county, which overwhelmingly supported Obama in last month's presidential election, has approved the second Monday in November as "The Barack Obama Day." Commissioners passed a measure that would close county offices for the new annual holiday and its roughly 40 workers will get a paid day off.
Sponsoring commissioner Albert Turner Jr. said the holiday is meant to highlight the Democratic president-elect's victory as a way to give people faith that difficult goals can be achieved. (emphasis mine)

Ok somehow I think having a day off is not really going to give people faith. I do think taking a course of action and having a plan and support would be far more beneficial. Then I keep coming back to the fact Alabama is in the South, the whole Civil Rights battles that were fought there and that secessionist/terrorist General Lee is still celebrated as some sort of hero. Celebrating 'Bama in 'Bama is going to really annoy some people......so I'm smiling with glee about it now!

Opinionated Viewpoints By Faith at Acts of Faith Blog at 2:47 PM

folks are really on it. this dude up in Cleveland wanted to name a school after him.

It doesn't take much for a thing to swerve into a strange direction.

To me the rise of Obama is a historical moment indicative of the typical rise AA and other BF are capable of --and will do. I have absolutely no doubt about that-- and that belief, nay knowledge is not solely based on information gotten by AAs alone.

However, I sense an attempt to warp its meaning. Can't put my finger on it yet...

Omi: I think people are missing the point. Look at how all the streets named MLK tend to be in the most blighted neighborhoods. Once the novelty wears off then what?

Miriam: I'm not certain about a warping but I think there's a combo assault and attempt to diminish the stature of Obama while a lot of people are simultaneously engaging in hero worship (but not realizing their full potential).