It's An All Williams Wimbledon Final Again - Spare Us The Haterade! 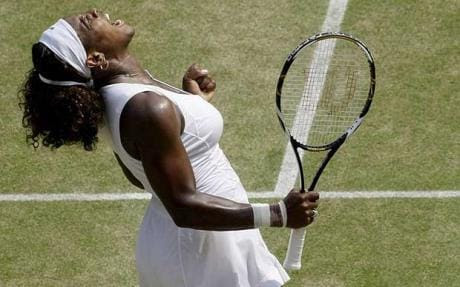 Venus and Serena Williams won in contrasting fashion (early) Thursday to set up their fourth all-sister Wimbledon final and eighth meeting in a Grand Slam title match. The sisters - who hold 17 Grand Slam titles between them - will face each other in a Fourth of July final.
“Oh, my God, this is my eighth final, and it’s a dream come to true to be here again and have the opportunity to hold the plate up,” Venus said. “A fourth final - it’s so exciting. It was so hard before my match to watch all that drama,” Venus said, referring to Serena’s semifinal. “
One Williams or the other has won seven of the past nine championships at the All England Club. Serena beat Venus in the 2002 and ’03 finals, and Venus came out on top against her younger sister last year. Yahoo sports

I am so looking forward to what will be an exciting match for the final Wimbeldon Ladies round. The fans of good tennis always are. What I am not looking forward to are the snide comments from the US broadcasters' decision to let some of the most hateful, jealous ex-tennis players moderate it. I'm calling out John McEnroe specifically because he doesn't even try to hide his utter disdain for all things Williams. You'd think it was a personal vendetta. Or that they had done something to him. We see you John.
I also see it as the allowance of the denigration of black women as started by black men for....you guessed it black women whose features, skin shade and appearance are not the sacred cow of fairness and light. We all know whatever activities women engage in, her appearance is more noticed and harshly judged than a man doing the exact same thing. A man with a big belly will be referred to as a teddy bear while a similarly shaped woman...is not. Both Venus and Serena have gone through their own journey as women and seem to have found their beauty regime and fashion niche.
I recall all the years they were ridiculed for their appearance which was really about their refusal to conform to what others wanted. Apparently it hasn't stopped as evidenced by this HuffPo article. It was always about the superficial. We know that had they possessed more "keen" features no one would have said a word. This isn't about pitting black women of various features against each other or elevating one over the other either. We know that certain black women time and time again get the short end of the stick and are bashed by other blacks for their features and some white men have taken their cue in adding to the pile-on (Don Imus, Asher Roth, etc).
It was also about their sheer dominance of a sport all-hallowed as lily white. Well Miss Anne and Mister have to take a back seat. They have ruled US tennis for the past decade and don't appear to be anywhere close to being on the back end of their peak. They should be on the cover of more magazines, have prime time specials dedicated to them and be afforded the respect they deserve for all of their hard work. When I watched the elevation of certain foreign white female tennis players over the players of their own country by the USTA and these commentators I shook my head in disgust. Federer gets more favorable press and he's the male champ from Switzerland! I also noticed last year how the Olympics were all about a certain white male swimmer who very quickly showed how false idols quickly disintegrate when proof of his drug use surfaced.
This isn't about the worship of athletes and celebrities, but have you ever heard of such a scandal with either sister? Of course not! If I hear another of these fake commentators talk of "physicality" I will hurl. It is not sheer "brute" force that propels these women as the premier tennis players of the last few generations. They're not superhuman. It is their mental focus, dedication to craft and practice. Oh and I'm certain a little natural ability, but that won't carry you over the threshold. I am also tired of hearing comments about Serena's body shape and weight. I cannot recall at any time that I've seen or heard them make public spectacles of themselves, bash other players, or be anything but model citizens.
We can't say the same for Gigantic Sense of Entitlement McEnroe can we? He's not the only one hired by these networks who's been snide, but he is the worse offender. He knows they are better tennis players and he wouldn't have been able to beat them even when he was in his prime. He really hates the idea that he'd have been beaten by two non-white women. It's another case of racialized sexism. You'd think these people would be relieved to have such exemplary players and role models for all the complaining about the numerous arrests and felonies of so many male sports figures. The disrespect is astounding and I'm here to declare: ENOUGH.
They are intelligent women who decided early on to not put all their eggs in one basket and expanded to other industries. They have also made tremendous humanitarian efforts. They live more exemplary lives than most people. Or at least they have the common sense to keep it private! I love the fact that they continue to kick butt and live their lives with dignity. They could care less and the haters can keep on hating! One of them will emerge victorious and one will be runner-up. They are both now and forever more winners at life.
Update: Serena Wins!! Now both sisters share 3 Wimbledon plates apiece. Can't wait until next year!

Opinionated Viewpoints By Faith at Acts of Faith Blog at 11:45 AM

I watched both matches live here in England. That McEnroe creature is not the only one. The women tennis players do it as well. Even Martina Navratilova has these same issues, and I was really disappointed because I used to have alot of respect for her (still have respect for the talent, just no longer the woman).

I remember during last years Wimbledon (2008), before the semi-finals involving one of the Willians sisters, several of the people entering the court were interviewed. One of them was a white british male who hoped the opponent (a white female) would win because he 'hates watching the Williams sisters play each other', then he added, with extra disdain..."because it's sooo boring". I was like, are you kidding me? Everyone is always complaining about how mundane the womens tour is compared to the mens, completely ignoring the fact that it is SOLELY because Venus and Serena are ten heads and fifty shoulders above the rest. Watching them play each other is probably the most entertaining thing to see in a women's game as atleast that way, you can't really have an outright, odds-on favourite. The real reason the man interviwed only wanted one Williams sister in the final was so that he'd have someone to support, or more accurately, someone wo cheer against. Once again, these haters will have to sit at centre court come saturday, knowing that no matter the outcome, they will be pissed!

That said, the match between Serena and Elena Demetieva was so tense. On the other hand, how in Sinbads name does a so-called world number one (Dinara Safina) lose 6-1, 6-0 in a Wimbledon SEMI-FINAL?! Then again, it was Venus that beat her behind, so not much of a surprise I guess!

McEnroe has been an a-hole since the beginning. I tune him out. The Williams sisters play exciting tennis. I don't want to watch some unseeded Romanian teenager, I want to watch the U.S.'s top players. Comments about physicality never bothered me, because it seems obvious that the Williams sisters do serious workouts in addition to their tennis practice.

JaliliMaster: Oh I know. I suppose I shouldn't have afforded her any cover. We all know these people and their haterade, but I was reading Serena's blog and she spoke about all the support she gets and how appreciative of it. So that's key. They are champions and those people are just bitter and past their prime. They actually piss on their legacy and any feelings of good will by their current behavior but they're too stupid to realize it. Those rankings are pretty meaningless to me. We KNOW who the best players are and their name ends with Williams!

NancyP: Welcome and thanks for your feedback. Yeah Johnny Stomp His Feet has always been a jerk and I'm certain his life reflects that dissatisfaction like an itch that can never be scratched because he's missing the very nature of human kindness.

Well, anyone who thinks these two finals were "boring" doesn't know what the heck they're talking about. Kudos to both players for outstanding matches!

PPR_Scribe: Exactly! I will never get tired of watching them play either. They are really good at what they do and very focused on doing well. It's something we can all learn from.

I absolutely love the Williams Sister, in fact they are the reason many people even have taken an interest in the sport at all. It makes me shake my head that girls that look like me still can't be recognized for our greatness.

NaturallyAlise: Well that lack of recognition is mostly coming from one source: black men and the black women who are dysfunctionally male oriented. If black people had raised a ruckus about it, things would've been different. But not with the bashing of bw followed by the Imus'. Luckily I was able to watch a foreign network's coverage and it was good. Also Johnny Hater-Seed commented on the Men's Final. Things are changing though just you wait and see. More bw are getting fed up.