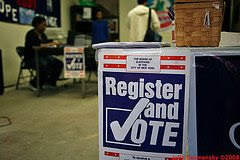 There are times when I think the only ideology separation between the Texas and California Governors is Maria Shriver hitting one of them upside their heads when they get too right wing. That and quite a few of us rabble-rousers keeping the illusion of a liberal State going. I've written quite a few blogs about the Governator and how some voters made a poor decision by sending him to Sacramento. I try not to rant anymore but honestly what else can I do? The state is in shambles and he PROMISED TO FIX IT NOT MAKE IT WORSE. He can't blame it ALL on the economy either.
Regardless of political party affiliation it is a FACT the Republicans blocked ANY passage of the State budget that called for an increase in taxes for the rich and refused to cut spending on the Prison Industrial Complex.  The debt ballooned to $43B. After CA was on the verge of total collapse a budget was passed - in part thanks to the three (3) Republicans that broke ranks. Notice I said a budget not a good budget. Note all the teachers that got pink-slipped afterwards - and there was still a $9B shortage. If that wasn't bad enough there's now an additional $21B shortage for this year. What the HELL-O is going on? Please tell me why ANY of these politicians (barring Karen Bass and Debra Bowen) are in office?
If you'd like to read the Senate Bill the Governor signed calling for this ballot legislation you may read it in its entirety here. Propositions 1A, 1B, 1C, 1D, 1E, 1F are up on the voting block this go-around as well as local issues. Now I'm not here to tell you how to vote, but the turnout is expected to be low for a reason. The governor is on his way out while pushing for 1A-1E hard. 1F calls for barring any raise for Legislators during a time of recession so I think the average CA resident will have NO problem supporting that one. So if you consider the piss-poor job that's been done by the same person asking for something it should give you pause.
Here's an interesting take from writer/activist Jasmyne Cannick:

Why is it that when Californian’s are threatened with early prisoner release, the government suddenly finds the money to avert the current crisis at hand? But when the same voters are threatened with the unexpected release of thousands of teachers from our public schools, it’s business as usual.
What could be scarier than another generation of undereducated young adults headed into the workforce? Where do you think they’re headed after graduation and the harsh reality sets in that they aren’t qualified to even clean toilet bowls? Newsflash—most people don’t commit crimes for the sake of committing crimes. I’m not in support of raising or extending taxes, let me make that clear. Too many of us are living without an income to tax in the first place due to the current economic crisis.

If you ask me, before we’re forced to vote, especially where our public schools are concerned, we should demand a piece of legislation be passed that mandates that all state, city, and county elected officials with children put their kids in a public school in the district they represent. And if their kids are headed to college, they have to first attend a 2-year community college or 4-year State University before heading off to the Ivy Leagues. If it’s good for the gander, it’s good for the goose and their goslings. Maybe then, they’d take this crisis a bit more seriously and stop playing Russian Roulette with the future of California’s workforce.

Voter Guide which explains the Propositions. By the way Election Day is May 19th BUT YOU CAN VOTE EARLY!!! You can go to your local City Hall and vote NOW. Don't pass this opportunity up!

Opinionated Viewpoints By Faith at Acts of Faith Blog at 9:57 AM