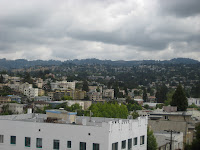 Lately I've had to remind myself that too much time spent in front of a computer can really impact one's social interactions. Before I made my full conversion to hermit I decided to get out and mingle some more this week. 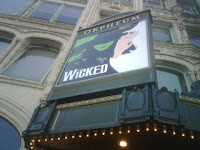 So in my continued effort at cleaning I tracked down two books that I'd failed to return to the San Francisco library. Finally!! Since I went to the Main branch I walked by the Orpheum Theatre where the musical Wicked is playing. I decided to try for a $25 lottery ticket at the last minute. Can you believe my name was the first name picked!! 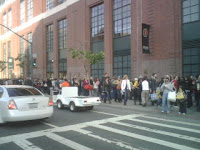 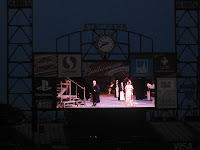 Friday the San Francisco Opera presented a live simulcast of Tosca at AT&T Park for free! I think something close to 15,000 people showed up. Based on the conversations I overheard quite a few attendees had never been to an opera. Or they weren't familiar with that particular composer (Puccini). Well this was a great time to learn.  The fact it was free and something a family could enjoy had to have been an added incentive.
I found two new wines that I really liked. It seems sacrilegious to say I do not like Chardonnay...but I don't. If drinking red is an acquired taste then I'm addicted now. If I'm 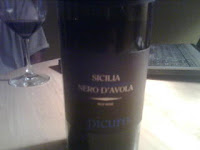 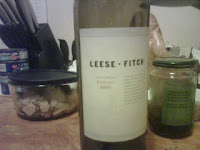 having a white I need it to a bold oak-barrel aged white with a buttery finish. I really prefer a pinot gris or grigio style. Or something clean & crisp that sparkles like a Presecco. Or a champagne of course! Does that sound like something a sommelier would say? 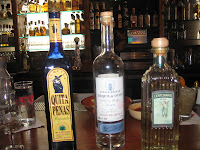 I took some photos from Lake Merritt (see top of page) and sampled really great tequila. Tres Agave restaurant has several dozen varieties of the best available and I had my very own tasting. Now I won't be giving up my #1 grain alcohol - vodka - anytime soon. Still it's good to be well-rounded. I usually don't have this much to drink in one week but I met some attractive, single, career-established men by going outside my familiar haunts.

Opinionated Viewpoints By Faith at Acts of Faith Blog at 1:52 PM