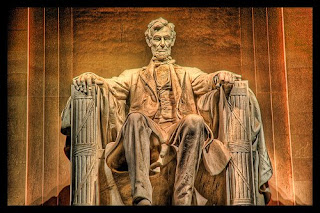 Well wouldn't you just know that when you think you're going in one direction, life throws you a curveball. I had considered and rejected the idea of going to D.C. for the Inauguration due to logistics, crowds and money. Monday afternoon I received a phone call from my representative that my ticket request had been processed. I have unused airline mileage I can redeem and a friend who lives in the vicinity so there's no reason why I can't go.
I do tend to be sensitive to weather as my giant rant about Denver would show. I'll keep any frustrations to myself this time! I didn't need the tickets to go, but I think the Universe is trying to assure me going has validity. I haven't made any resolutions per se but I've been stuck in a rut, questioning myself and this is just the boost I needed. I told a few people and their reactions were so positive and encouraging that I am even more grateful for this opportunity. This is the continuation of my awakening, an unfolding of the best parts of myself that until now could not bloom.
2008 was a time of reflection, upheaval and a shifting of thought. There are a few things I want to accomplish in 2009 and I must confess I was starting to falter. I want to make the "right" choices to yield the best results. So why would going to an open air event in the freezing cold help? Well, it's the energy and the people I am certain to meet. I started blogging after contemplating it for months once I attended a blogger conference and met some awesome women. I don't have access to the elite events or unlimited funds to attend the Inaugural Balls. I'm just your average citizen on a tight budget.
You have to understand I went to Denver for the Nomination at the last minute. I'd emailed a fellow commenter at a blog we both frequented and asked if they had a spare badge - and it worked out. I stayed with a volunteer. I didn't meet either person until after my arrival. I certainly am not lacking in daring. Was it just something meant to be, did I create an outcome or was it pure dumb luck? I still wonder because I have other things that I value much more that haven't come together that easily. I want to bottle it's essence in the hopes I can recreate the process.
For some people being part of the glitterai is a regular aspect of their lives. The Inauguration is just the beginning of their social calendar for the year. They may know world leaders and this is a little bit special but it won't be the pinnacle of their lives. Others will watch on television millions of miles away with awe and joy. This is just the kick in the pants I need. Well, perhaps it's more like the hug that I really needed. What are the odds for an unconnected, unknown person getting to Denver and D.C. for both events? I am very humbled right now.
I will be certain to blog about this. Perhaps I might be persuaded to exchange my ticket for some, eh renumeration. (I hear they're going for thousands).
P.S. I'd really like to go to Sundance next!
Photo Source

Opinionated Viewpoints By Faith at Acts of Faith Blog at 12:05 AM

Good for you! Have a great time, and a safe trip! I look forward to reading about your experiences.

Hooray that you are going to DC. Remember me, I met you at the Convention in Denver as we shared a cab to the point 40 miles(or so it seemed)from the Stadium?
Well, we had considered going to D.C. but chickened out. So now I am going to follow you through your blog and feel like I am there with you. Best to you. Ginny Agnew

Khadija: Thanks! It's 60 degrees in SF right now so I need to find my winter coat and a few sweaters.

Ginny: Hi! Happy New Year? I had no idea you still visited from time to time. No I won't ever forget Denver for numerous reason but you and your husband were certainly on the nicer end of the spectrum! Thanks for checking in.