The coverage of FLOTUS Michelle Obama in the UK and France has me tearing up a bit. I know it's been disseminated on blogs and has received its ample share of news coverage. I also know it's symbolism and we have our work cut out for us to really see hope and change manifesting itself. The fight for justice to attain peace never ends, but dang it let's have a moment to celebrate!! It's Michelle's first trip abroad and it's about time. I know many people who've never left the US and believe me you're missing out when you don't see how other people live. You don't realize how insulated we are in the US - and it's not in a good way either. I wonder if Michelle had to apply for a passport since she has her own personal sovereign nation in the air?
The Queen of England clearly likes her (and it's usually hard to tell if she likes anyone). Loved the Stephen Frears movie on her by the way. Since Michelle's representing the US it's great that they have a cordial relationship. What is this ridiculous fake fashion quick-draw contest between the First Ladies of the US and France? Carla Bruni has years of experience on Michelle in that department but they look equally smashing don't you think? And why didn't the press consider Sarah Brown an ample glamour challenger? Why are women placed in these tired gender based limitations? Better yet - who's next? I saw Naomi Campbell hightailing it back to jolly ol' England for the chance to strike a pose next to our FLOTUS. See video of their meeting at the Guardian UK with no annoying commentators! 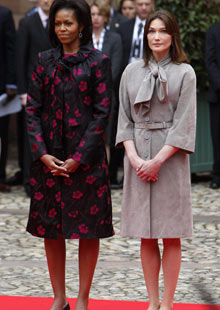 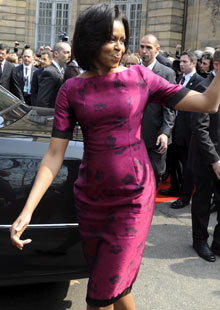 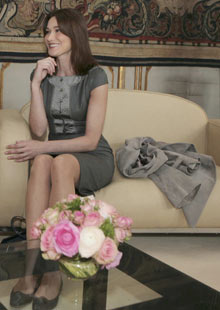 This is supposed to be somber occasion for all the world leaders to discuss how to put Humpty Dumpty back together again and with the G20 protesters and such things can easily get lost in the shuffle. As if we need reminding, the world economy is in the toilet and unemployment in the US is the highest it's been since Reagan took office. That's scary!
Yet, I see how excited the young women were to be able to see Michelle in person and it warms my heart. In the worst of times we need touchstones to remind of us of the good that exists in the world. We need to keep a positive mindset which is something I definitely struggle with. She made some great points about education and having positive male role models that guided her. She let everyone know she may not have come from money and has to learn certain social graces but she's still a woman of substance. We are in control of our destiny! She's not perfect but she's our First Lady - and it's a great thing!

Opinionated Viewpoints By Faith at Acts of Faith Blog at 2:25 AM