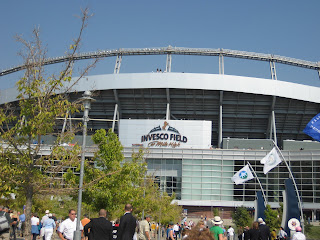 The first tallies are coming in: McCain has won Kentucky with 8 Electoral votes while Obama has won Vermont with 3. It's going to be a long night folks. Here I thought I'd be running all over town and feeling totally wired, but I'm sorta calm. We've done all we could. It's up to the people of this country to make a choice of mediocrity and division or go the course less travelled.
It all came together on a warm evening in August where Barack Obama accepted the nomination of the Democratic Party for President. I took a bunch of photos and shot some video. I've added them to my Flickr account but will post a few here (sorry for the one photo Blogger is NOT cooperating) for viewing.
And if you can stand the sweetness, Black Snob has a great array of photos of our future First Family (whether it's now or 2012 or thereafter) that will give you instant cavities!!! Oh it's so good. Professor Tracey has a hilarious Top 10 List that I can agree with. Has no one put out an ABP on Ann Coulter?
Ok, that's it for me I think. I may be back cuz I can't help myself. I'm going to making a few nation-wide phone calls to check in with friends and la familia just to calm myself. I'll pop into the local Obama HQ and I will probably go to a watch party. I need to charge my laptop though.
Good Luck to us all!!!!
Opinionated Viewpoints By Faith at Acts of Faith Blog at 5:24 PM