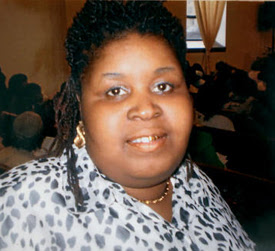 courtesy of Gothamist
You know since all the focus has been on one cop, two cop, three cop CYA by the top brass with the subsequent "blue wall of silence" and protecting the brand by any means necessary it's very easy to forget the VICTIM. Who is was African-American woman from Brooklyn. Even I had to look up the name of Vionique Valnord who was mowed over by the drunk cop after attending a wedding. The majority focus has been on the cop(s) involved in the coverup and she's been virtually erased from the conversation. The media could be referring to her as Jane Doe. That cop and his buddies decided to tamper with evidence and give false statements to make it look like an random accident. Allegedly. She died.
This same drunk cop who bragged about trying to save her life is a LIAR. Allegedly. He's been charged with vehicular manslaughter. Even NYC Mayor Bloomberg has publicly blasted them - and you know that rarely happens! Well we have the court system where the prosecutors and police and judges all know each other. Justice is blind. Allegedly. So as the suspensions pile up and the supervisors' attempt at making this go away FAIL MISERABLY (let's hope so) I sense a big fat payout in civil court will be the end result but zero criminal justice. It will never replace the life of a woman SENSELESSLY and UNNECESSARILY cut down in her youth. Cops are supposed to be held to higher standard. Allegedly. Protect and Serve and all that...BS. You don't actually think this is the FIRST time something like has happened do you?
How many other cops pass around water and gum in an attempt to mask drunkeness, blame the weather and REFUSE to be tested for blood alcohol levels - or delay them until they'd be rendered ineffective? How many passengers flee said scene to avoid involvement when they did nothing to stop the drunk person from getting behind the wheel. Oh...they may have been even more intoxicated...but not enough to miss a pedestrian being struck and killed. EVIDENCE TAMPERING and PROFESSIONAL MISCONDUCT by the cops has occurred. Yeah, I said it!
Otherwise why would they have been suspended? Of course arresting someone for a crime and convicting them requires a specific set of circumstances. People charged with crimes who are GUILTY of said crimes can be found "not guilty" when there isn't enough evidence to prove the prosecution's case. Which brings me back to the evidence "mishandling". Who's actually interested in justice here aside from the family? I won't be holding my breath for the Civil Rights organizations to do anything either. It may be white cops involved in a crime against a black person but it's the "wrong" gender for them to care enough about.

It's a sad story but the cop probably won't be punished for what he did. It seem like they always get off the hook. How did they find out the evidence were tampered with?

The Misses: Three cops have been suspended so far. By tampering I'm referring to the cops trying to mask the drunkenness and the refusal to take a breathalizer test and then the delayed processing of it. It could very well be the difference between a conviction and an acquittal.