I watched the documentary Taxi to the Dark Side detailing the approval of torture of detainees (the abducted) by the US military. The Geneva Convention and Habeas Corpus have been thrown out the window. Mass hysteria caused by witnessing the horror of seeing the Towers come down or of seeing people jump from those buildings before its collapse did incite us and conditioned some of us to accept whatever 'solution' was offered just to make it stop.
The subject of this documentary sickened me and I was reluctant to watch it at all except I know it is my responsibility as a citizen and as a voter to pay attention to what the gov't does. Especially when they claim to do it for my benefit. If others had not been diligent in exposing these atrocities we'd never know how far down the rabbit hole really is. We still don't.
To be clear there are people out there who are dangerous and would be considered terrorists. My question is: which came first, the chicken or the egg? 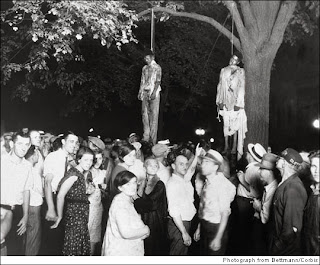 The Ku Klux Klan was allowed to terrorize an entire group of people for nearly 100 years unfettered.  Let's just say these people who witnessed, participated in and approved of such treatment and the mentality behind it are seriously lacking in a proper moral compass.
Now for all the heavy-handed words from gov't officials who've assured us repeatedly every violation was for our good and use of brute force necessary it seems there was something lacking: sound judgement.  It is so easy to treat people like dogs when you see them as one....or less than one in fact.
Which brings us to the latest bit of nastiness on the campaign trail. The McCain brigade has sunk so low he has to reach up for the gutter. There are no circumstances which a candidate for office should allow their supporters to call for harm to come to an opponent. I think McCain forgets that if he'd been treated the way the US treats enemy combatants he might not be here right now.
He was on World News Tonight and reacted angrily when Charles Gibson asked him about directly confronting Obama instead of being a punk during his Klan rallies. He said he would. I'm looking forward to McCain showing his ass on national television for next week's debate. I hope he does it. Let the people get a glimpse of the real McCain (angry, disrespectful, avoiding eye contact, racist and petty) and imagine how all that negativity would turn off other world leaders. Since he's planning to bomb a zillion countries anyway I suppose it doesn't matter to him.
He knows tying Obama to William Ayers is a gross misappropriation. McCain has plenty of questionable associations and character lapses. This is all he has left because he's on the verge of losing this election. He has to make Obama the 'other'. We see what happens when those with positions of authority (and control of media) accomplish that goal. We also see when it backfires! The lowest road traveled will always appeal to some but most of us chose to aim higher and see the good in people. We've had 8 years of beating up on people and being scared and now we're being robbed of our futures. I know I'm tired of being manipulated - aren't you? It's time for something new.
Opinionated Viewpoints By Faith at Acts of Faith Blog at 8:59 AM

Thank you so much for sharing these important insights.